This page features many pictures. It may take time to load.

Cant? Not in our vocab! Need some chrome to get you home? We can do it! Need a complete restoration? We can do that too!

How about those boogie lights all you're buddies have? We've got them! If you want something a little more unique we can make them flash to your radio or an iPod too. The possibilities are endless!

Do you see "Gangster"  bike in the pictures?  Custom paint jobs can be arranged as well! 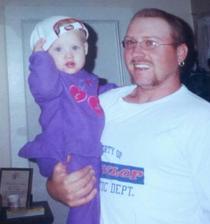 Scott was the VERY first person to ever walk into our store. While we were in the midst of moving everything in,  this knucklehead came banging on our door. We like to joke around by saying that we almost didn't let him in with the way he was banging on the door. LOL. He's been one of our biggest supporters from the get go. Scotty walked in and just had to be the first one to buy a shirt. Almost 10 years later he STILL has the shirt. He still manages to come by almost every weekend just to say hi.

When Scott started having some health issues, he sure didn't want to stop riding. He got with Mike and they decided to build his custom bike into a trike. He's since put on some personal touches and we think he's done a great job both with the motorcycle and in physical recovery. We have nothing but love for you man! We're so proud of all of the obstacle you have over come in everything in your life! Thanks for being apart of the family man.

Not many people know the story behind Mike's custom chopper. While finishing up building his custom chopper, Jason Stover, Mike's nephew lost his life in a tragic accident. The back fender is dedicated to Jason and his memory.

Get a 1 up on the other baggers!

Are you ready to transform your bike into something more?

It's the hottest new trend in wheels today!

Get that big boy look by giving us a call!

Long before Doc a.k.a Mike and Pam opened Freebyrd, he had a passion for bikes. While not all of these bikes were built before the opening of Freebyrd, most were. Mike completely rebuilt his best friends 2003 Softail into what's known as the "Stevie Ray Vaugn" bike. The Mustang bike was built for his wife. Mike and Pam went into a Ford dealership, Pam wanted the Mustang, Mike wanted the Harley Truck. Their compromise was Mike got the truck and Pam got her own "custom" Mustang themed motorcycle.

In Loving Memory of